The hot and muggy morning of July 10th started like most of my mornings during the work week. I set out to my office at Randy May Electric on Hunter Road. This day, I’d be taking my beloved cat, Mr. Orange to the groomer next door. As I pulled the cat carrier out of the car, the carrier broke, allowing Mr. Orange to run free. Being an indoor cat, his first instinct was fear, and he darted for a nearby drain pipe. I enlisted in the help of some coworkers and electricians to help in retrieving my cat.

For 30 minutes we worked to coax Mr. Orange out, after which we resorted to PVC pipe on one end while myself, Brenda, owner of Randy May Electric, and another electrician attempted to catch him as he came out. Our plan would backfire, as he pounced through my arms and into oncoming traffic. Brenda jumped, frantically waving to stop the vehicles coming on both sides of the road. I quickly noticed Mr. Orange running into the woods between UPS and StoneWorks. I soon realized my search was just beginning.

I could hear Mr. Orange’s cries in the woods. However, given the terrain, finding him was like finding a needle in a haystack. Scared and alone, he continued to run, and his cries began to fade. My hopes of finding him would be soon to follow. For more than two hours my co-workers and I searched the woods, but as time wore on we realized that our search was becoming fruitless. Emails were sent out to as many businesses as possible on Hunter Road as well the Humane Society, along with a photo of Mr. Orange and a plea to keep a watchful eye out.

While my hopes continued to fade, co-workers and friends continued to support me, trusting that this love of mine would somehow find his way back. Having never been outside, especially nowhere near my home, I found it hard to believe. Juno Kinavy, a personal friend, graciously retrieved some traps from the Human Society, and set them in the woods with food and water. The first few hours became a painful waiting game.

In the late hours, I returned to the traps to search for Mr. Orange when it was quiet, in the hopes that I could hear him. My heart wanted to continue the search, but my mind knew better, and I ended the first day of hunting by leaving Mr. Orange’s cage outside of Randy May Electric’s office, hoping he would recognize his own smell.

As one day turned to several, Mr. Orange’s cage remained empty. Each morning, I’d pull up to work with the hopes that he’d be waiting, and each day only led to disappointment. I got into the painstaking habit of setting the traps in a variety of locations. Day in and day out I would check them with no luck. There were lots of animals populating the woods, including plenty of raccoons and a few possums here and there, but Mr. Orange seemed to be eluding me. I would routinely get assistance from the employees at Stoneworks in releasing those that were more interested in the traps than Mr. Orange. 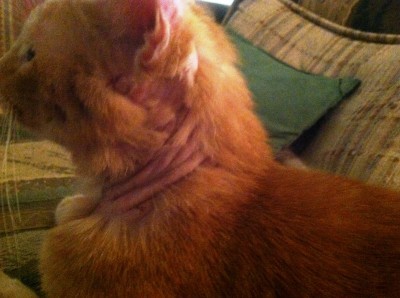 Fierce storms began a day or two after Mr. Orange went missing. Thunder, lightning, and occasional flooding became a common occurrence. When it wasn’t raining, the heat and humidity persisted. There was no way I thought he could survive the elements.

For more than twenty days, I sustained hope that Mr. Orange would make his way home. Mornings, nights, and even weekends were pre-occupied with my will to find my cherished cat. I went so far as to place articles of clothing and shoes around the area, knowing that he would follow the scent he had grown up around. I can’t say for sure if it actually works, but my desperation was growing and my options were shrinking. Occasional sightings arose with tips from friends. And while I never lost hope that each sighting would be “the one”, they continued to come up fruitless. Except the last one…

Sheila Clark, owner of Salon 5200, and a close personal friend had been helping me for some time. An animal lover herself, she knew the exact pain of losing someone so close. Together, our network of friends could just bring Mr. Orange back home. 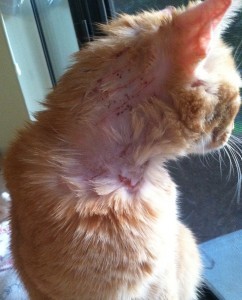 On August 12th, I received a phone call from her telling me that Holly at Groomingdale’s on Cardinal Road had found an orange cat in the marsh. Like all of the other sightings, I immediately rushed over optimistic, but cautious at the same time. My hopes had begun to diminish after so many days. Lo and behold, Holly had spent more than 20 minutes to get Mr. Orange out of the marsh. My search had finally come to an end.

My initial celebration was somewhat short-lived, as I could tell he had been injured and some of his hair was missing. But injured, tired, and hungry, Mr. Orange was just happy to be home. A trip to Dr. Colorado at the Animal Car Clinic reassured me that there were no broken bones, and any injuries he sustained he was already recovering from. A dose of antibiotics and anti-inflammatories, and Mr. Orange was well on his way back to perfect health. My entire family is relieved and happy to have him back home where he belongs.

Thank you, Holly and All of the Staff at Groomingdales! Through the middle of a busy day, you found the heart and time to take care of someone so near and dear to me.

CREDITS TO THE LOCAL HILTON HEAD ISLAND BUSINESSES WHO HELPED: